I have recently presented a contribution in the with Francisco Pedroche on rankings. We have particularized to Spotify. While people around the world stopped, music didn’t: we have shown that during the worst months of the pandemic, the list of the Top-200 hits on Spotify, produced from the streams registered on the popular app, had 18% more songs. The most played songs worldwide, during the months studied, were Dance Monkey (Tones and I), Blinding Lights (The Weeknd), and The Box (Roddy Ricch).

This means that, regardless of whether record companies published new material or not, listeners changed their preferences more often during the pandemic, thus causing an increase in the number of songs that made the lists. Thus, the first quarter of 2019 registered 474 songs on the Top 200 list, whereas in the same period of this year, the number of hits was 557, which represents an 18% increase. This figure reveals a significant increase when compared to the 1% decrease that took place during the same period from 2018 to 2019, or the 9% increase from 2017 to 2018.

Some links to the news on this paper: MUSIC NEWS, TIME24, La Vanguardia, and ABC.

I have taken part in the ICIAM conference held in València. I have been involved as a member of the local committee, and also as a coorganizer of a minisymposia on Dynamical systems with applications to science and engineering. I have also delivered a talk entitled «Dynamics of the data dissemination in 5G opportunistic networks», of a joint collaboration with the Grupo de Redes de Computadores (GRC) of the UPV.

I have also had the opportunity of publishing and outreach article on Mathematical Modelling in Energy Efficiency Problems, jointly with P. Fernández de Córdoba, in the Intelligencer delivered to all participants.

In this workshop I have presented some results, jointly with J. Bès and D. Papathanasiou, related to the quest of algebras of hypercyclic vectors (vectors with dense orbit) for convolution operator on the space of holomorphic functions. 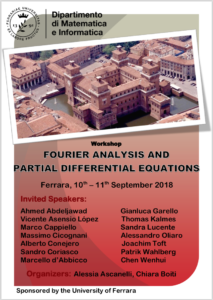 I have been invited to dalivered a talk at The Tenth International Conference on Engineering Computational Technology held in Sitges. In this conference I present some results on algorithmic solutions for managing car-sharing and car-rental companies in order that there was a participatory management with the users. The title of the talk was Iterative algorithms for car rental and car sharing transport management and it was shown within the Special Session Iterative schemes for analyzing nonlinear problems: Numerical and dynamic. The results are part of a joint work with Cristina Jordán and Esther Sanabria-Codesal from Universitat Politècnica de València, too.

Iteration Theory  is a branch of mathematics and includes topics related to discrete dynamical systems and functional equations. The aim of these theoretical studies is to model, analyze and understand iterative processes, for example systems with discrete time. Such systems arise in many different fields of application: engineering (eg. control theory and electronics), physics, mechanics, economics, biology, ecology, and so on.

20th ECIT follows the sequence of meetings started in Toulouse 1973. The previous one was held on Innsbruck 2016.